How I was Drawn into Modeling the Classic Maya Collapse 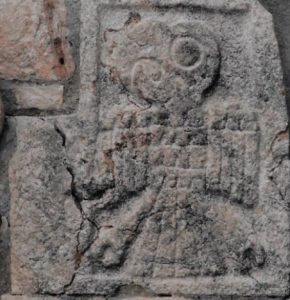 Do I find modeling projects, or do they find me?

The former was true when I was looking for PhD thesis subjects in the early 1970s. Often in graduate training, a person’s thesis adviser would assign his students a problem, usually enlisting the student’s help in his or her research program. My thesis adviser was Max Dresden, an engaging theoretical physicist who was interested in working in many areas within theoretical physics, in writing about the history of physics, and in applying physics to other fields. When I first asked him if I could be his PhD student, he told me he was a “generalist.” That meant he did not have any research program, and I would have to find my thesis problem on my own.

I ended up working on two different problems for my thesis, the first I found by rummaging through an old preprint pile of papers. Preprints were early versions of papers whose authors hoped to publish, or papers soon to be published. These days people summit “preprints” to Cornell’s University’s online arXiv repository, except they call them e-prints. (ArXiv provides open access to e-prints in Physics, Mathematics, Computer Science, Quantitative Biology, Quantitative Finance and Statistics). In contrast, when I was in the PhD program personal computers were still a dream. I used a slide rule to do calculations.

For the second problem, I found a Science News article on Non-Standard Analysis, a new theory of infinitesimals and infinite numbers. It was an esoteric form of mathematics. I thought we could apply it to handle some infinities that crop up physics. Max agreed, and we were off and running.

What follows is a story about how a modeling project found me. In particular, how I came to model, and continue to model, the Classic Maya Collapse. To say a project “found me” is probably too simple a way to express what happened. I had to allow it to capture my interest and then decide it was worth the effort to pursue.

Over the last three years, this was the third project that found me, each with its own interesting story. One resulted in a paper published in the Systems Dynamics Review (2017), and the other in an article on interest and inflation. It appears I subscribe to the “serendipity approach” to the “finding of modeling projects”: find projects where no one else is looking and discover unexpected opportunities.

Many of my modeling projects started with an accidental meeting, and the Maya Project was no exception. In July 2015, David Lounsbury and I completed a three-hour, System Dynamics workshop at the System Dynamics Society (SDS) Conference in Cambridge MA. The workshop covered how to use psychological and sociological variables in computer simulation models. It was about putting emotions like anger or enthusiasm into models. After the workshop ended, and since my flight home was not until the next day, I asked the people remaining in the classroom if anyone wanted to go to dinner. Two people said yes, and one was Dana Ilmari Polojärvi.

Dana is a Professor of Humanities and Communications at the Maine Maritime Academy in Maine. He is interested in using System Dynamics to teach system thinking within his humanities courses, especially history. Most of the students at the Maine Maritime Academy are there for a technical degree and question the relevancy and value of humanities courses. Dana wanted to change that view by introducing system dynamics to model history.

Other people have used System Dynamics to teach humanities courses. Pamela Lee Hopkins wrote a paper in 1992, “Simulating Hamlet in the Classroom”, about her experiences teaching Hamlet using a System Dynamics simulations model. Here is Hamlet’s basic plot: prior to the beginning of the play Claudius killed Hamlet’s father and married his mother. Hamlet broods his way through the play and finally feels he has enough evidence to take revenge and kill Claudius. Then, Hamlet succumbs to being poisoned.

Hopkin’s computer program sketched how Shakespeare revealed evidence against Claudius throughout the play. It modeled Hamlet’s “brooding” process; and, how he handled old and “newly revealed” evidence. It monitored Hamlet’s motivation to take revenge. It set a “threshold to act” for when Hamlet had enough motivation and evidence to kill Claudius. The students read the play and decided when the play revealed evidence, which they then entered the model. At one point, the computer illustrated Hamlet killing Claudius. A new online version of this model, Virtual Hamlet, will allow you to experience this drama yourself.

Hopkins had engaged her students. She wrote, “The students were engrossed throughout the process. It was necessary for me to mediate near-hostilities on two occasions within the same class. The amazing thing was that the discussion was completely student-dominated. For the first time in the semester, I was not the focal point of the class. I did not have to filter the information from one student back to the rest of the class. They were talking directly to each other about the plot events and about the human responses being simulated.”

It surprised me to learn that because of Dana’s presentation at that meeting, a small group of people set up a “SD and History” working group. I quickly joined that group. We have been meeting about once a month over the last year. We focused on using System Dynamics to understand and model the collapse of civilizations – why start small. Our current group includes Dana, David, John Hayward and I (and many more today in December 2019).

Dana used Jared Diamond’s book “Collapse: How Societies Choose to Fail or Succeed (2005)” in his humanities classes, where he wanted to discuss how System Dynamics can model and provide insight to some of the case studies in the book. We all became familiar with Peter Turchin’s work in applying quantitative analysis (aka mathematics) to model and understand history, which include his books: “Historical Dynamics: Why States Rise and Fall (2003)” and “War and Peace and War: The Rise and Fall of Empires.” Turchin created the field of Cliodynamics, which according to him is “a transdisciplinary area of research integrating historical macrosociology, cultural and social evolution, economic history/cliometrics, mathematical modeling of long-term social processes, and the construction and analysis of historical databases.” He also created the journal “Cliodynamics: The Journal of Quantitative History and Cultural Evolution.”

John Hayward started converting Turchin’s historical models from the book “Historical Dynamics” into System Dynamics models. You can explore and run his models online. In the “explore” mode, each model allows you to see how it is built.  In this way, it tells the model’s story. Here are his current models: Turchin’s Meta-ethnic Frontier Theory of Imperial Growth; Collins Theory of Geopolitics (1) The Effect of War (2) Logistical Load; The Dynastic Cycle; and, Rise and Fall of Empires (with Paul Roach and John Wybum). See John Hayward’s ISEE Exchange page for these models. 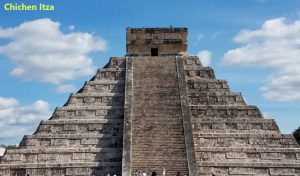 At one of our meetings, Dana mentioned the book “The Dynamics of Apocalypse: A System Simulation of the Classic Maya Collapse (1985) by John W.G. Lowe. Lowe used mathematical modeling and computer simulations to model the Classic Maya Collapse. The book caught my immediate interest. I decided I would implement Lowe’s approach using System Dynamics and see if I could replicate his results. I will tell you about that effort in future post. We presented prelimimnary results at our Psychology and Human Behavior SIG meeting on July 19, 2017.

Here, I just want to tell you something about the Maya, what “collapse” means in this context, and what Lowe modeled. Hearing rumors about ancient ruins in the jungle, Stephens and Catherwood penetrated the rain forests of Central America to re-discover the Maya civilization in 1839. Located in parts of Mexico and Central America, the Maya were an advanced civilization with great temples and impressive monuments.

Jared Diamond in his book “Collapse (2005) says “ [the Maya sites] were once the sites of the New World’s most advanced Native American civilization before European arrival…” The Maya had a writing system and a very accurate calendar system. Significant progress been made in deciphering the Maya language in only the last 50 years. The Maya were also advanced astronomers and had a sophisticated system of mathematics. They were one of the few ancient civilizations to have a symbol for zero (although they may have inherited it from an earlier Mesoamerican culture, the Olmec). 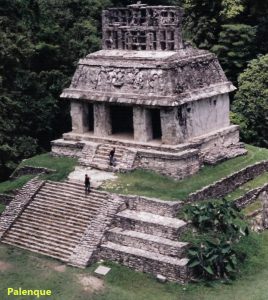 The great depression was a global economic collapse that started in 1929 with the stock market crash and lasted for ten years. Yet, the world recovered. The Classic Maya Collapse began around 750 AD and may lasted for about 150 years, illustrating why some authors have referred to this as the “slow collapse of a civilization.” The Classic Maya Collapse refers to the Maya civilization in the southern lowlands: Guatemala, Honduras, Belize, and the southern Yucatán. What does collapse mean for the Maya? And, did they recover?

During the period of the Maya Collapse, the Maya lived in many, mostly independent city-states (perhaps 60), each with its own king. Maya never formed an empire under one central authority. At different times over a period of 150 years, each city-state was abandoned with 80 to 95% of the population gone. It was not just a decline in population that changed, but also a cultural tradition where rulers have a quasi-divine status. Researches think some factors that may have contributed to the collapse are failures of divine rulers, unchecked population growth, environmental degradation, drought, and escalation of warfare. Lowe modeled the latter.

There is evidence of internal conflict among the cities. Lowe created a set of equations to model that conflict and illustrate the slow collapse of the Maya city-states. The site of each Maya city-state had dated monuments. Lowe used the dates of the first and last monument to estimate the lifetime of a particular city (when they were born and when they died). He used this data to estimate how many city-states were active and how many were abandoned at a given time. He then fit his theoretical model to the empirical, monument data.

Earlier I mentioned that I followed the “serendipity approach” to the “finding of modeling projects” I also believe in placing yourself in environments where “serendipity” is mostly likely to occur. This includes being open to the serendipity of collaborative work, especially working within groups like our System Dynamics and History group. It is also useful to network in venues that bring together diverse thinkers like the System Dynamics Society. 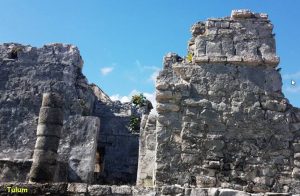 Last year the founder of System Dynamics, Jay W. Forrester, died at the age of 98. In his article “Learning through System Dynamics as Preparation for the 21st Century”, he wrote: “Transferability of structure and behavior should create a bridge between science and the humanities. Feedback-loop structures are common to both. An understanding of systems creates a common language. Science, economics, and human behavior rest on the same kinds of dynamic structures.”

Furthermore, as David Lounsbury wrote to me recently “there is a need for learning through modeling as a means to prepare for and engage the currently unfolding challenges to our social systems and the well-being of the planet.”