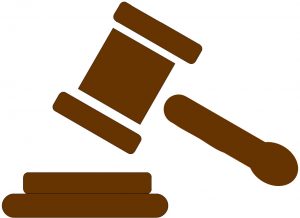 On a cold, sunny day in October 2015, I reported for jury duty in Montgomery County Maryland, where jury service was for one day or one trial. After a long orientation, I was called to a trial. Along with sixty-four other potential jurors, I went to a courtroom and endured five hours of a grueling jury selection process. During this “voir dire” (”speaking the truth”) step of the jury selection process, the judge asked endless questions:

“Do you know the defendant?”

“Do you know the defense lawyers?”

“Do you know the prosecuting attorney?”

“Do you know any potential witness?”

“Are you a lawyer or a police man or police woman?”

“Is there a lawyer in your family?”

“If any of this true, will it prevent you from dealing fairly with the defendant?”

While listening to the questions, I kept updating probability estimates of my likelihood of being selected for the jury. With sixty-five potential jurors, my initial estimate gave me a little more than a one in five chance of being selected for the twelve-person jury. My chances increased as candidate jurors were gradually dismissed by the judge because of their responses to his questions. Potential jurors who answered “yes” to any of his questions lined up to give an explanation to the judge, the defense attorney, and the prosecuting attorney. The judge turned on white noise machine to keep his conversations private, and then and asked each juror to step before the bench. While each juror responded in detail to the judge’s questions, the lawyers furiously took notes. I suspected the lawyers wanted as much information as possible about the potential juror. Being naturally curious, I wish I knew what they wrote and more importantly, the reasons behind each entry.

At one point the judge asked the potential jurors if anyone had a strong emotional response to the crime. After a few moments, I stood up and went to the back of the long line forming in front of the judge. When it was my turn, the judge asked me if my emotional response would prevent me from being fair and impartial during the trial. After I said I could be impartial, the prosecuting attorney noted that I had put “modeler” as my profession and asked me what that meant. The judge, possibly confused or just curious, also asked me to explain. I then launched into what I later thought was a mildly, incoherent explanation. I mumbled about having a PhD in mathematical physics and modeling physical phenomena; modeling spacecraft attitude; later, becoming a life coach and modeling psychological issues; and, having recently written a paper on the psychological aspects of creating probability estimates. Afterward, I thought I needed a good, short description of a modeler (and a stiff shot of espresso).

After the voir dire step was complete, it was time to select the jury. Fifty-one candidate jurors remained, giving me a little more than a one in four chance of being on the jury. Each remaining potential juror had been assigned a number between 111 and about 250. With only fifty-one possible jurors left, not all of these numbers was taken. My number was 216, which meant there were likely thirty-eight jurors with lower numbers. The judge asked the person identified by 111 to stand and come to the center aisle. He asked the prosecuting attorney and defense attorney to say whether they would seat the person as a juror or excuse them. As each candidate stood up and the jurors were selected, each attorney’s took a turn in giving the first response. After about nine jurors were selected and they reached candidate 150, I was pretty confident that I would not need to stand up and have the attorneys decide whether to seat me. I gave myself a probability of being selected as near zero. Then, the unexpected (at least to me) happened. The judge asked each attorney if they were satisfied with the jurors that were selected. Recall that prior to this both attorney’s agreed to seat each of the candidates on the jury. After consulting his notes the defense attorney excused two of the previously selected jurors; the prosecuting attorney excused two more. Now, five jurors needed to be selected. Several thoughts raced through my mind. First, I thought that the review forced the attorney’s to think in a different way about the jurors they seated. Rather than make quick-fire yes/no decisions based on each new candidate, they had to reflect on the results of each other’s decision so far, and look at the jurors as a group. I wish I knew how they reasoned. Second, I did not realize that they also needed to select two alternative jurors, who would sit through the trial and possibly replace actual jurors. Third, my probability calculations were shot to hell since the assumptions I used were not true. Probability calculations can be so finicky at times. Actually, I needed a more sophisticated probability model.

When the attorney’s had seated all twelve jurors, the judge asked each attorney again if they were satisfied with the seated jury. They were not satisfied, and excused two of the seated jurors. The attorneys quickly filled those two seats. They now need to seat two alternative jurors. Then, the judge call number 216 and I stood up and walked to the center aisle. My probability of being selected for the jury rose to 50%: I was either going to be selected or not. I was exceedingly curious about the whole trial process, yet I wasn’t sure whether I wanted to give five days of my life to the trial. I held a copy of “Thinking, Fast and Slow” by Daniel Kahneman, a book about cognitive biases, heuristics, and illusions. I thought they won’t select me if I held it in front of me. I ended up holding the book behind me. The defense attorney spoke first and said “seat the juror.” Without looking up from his notes, the prosecuting attorney said “excuse the juror.” I turned around and left the courtroom.

As I took the elevator down to the lobby, went out of the building, and walked to my car, many questions raced through my mind. Was I not selected because of my profession, or how I described my profession? My discussion with the judge about having an emotional response to the crime did not affect the defense attorney, who wanted to seat me on the jury. Perhaps the prosecuting attorney had a better candidate in mind and was waiting for his or her number to be called. I wondered about each attorney’s mental model of how to seat the best jury, and about the judge’s mental model on the best way to select a jury.

I asked Clif Brown, one of my friends and a lawyer, if he had any insight into why I was not selected. He said “the only guess I can make is that the prosecutor viewed you as highly educated and therefore more thoughtful, with tendencies to see things in shades of gray. The prosecution would prefer to have a more ordinary individual who would tend to be more emotional and see things as good or bad, black or white. So much criminal stuff is a question of degree and circumstances that the prosecutor doesn’t need it parsed further out by a jury member with those tendencies.” Clif’s explanation is similar to the one I have heard from others, and fit the facts.

When I heard this explanation, I immediately thought of a perceptual filter that describes how people package information in a particular context. One possibility is “black and white (either-or)” thinking. Another possibility is thinking anywhere along a continuum, which includes thinking within the gray areas, thinking about possibilities (or with probabilities). Suppose a continuum thinker and a black-and-white thinker meet at a party and discuss politics. The former might think of the latter as too dogmatic, while the latter might think of the former as too indecisive.

Let’s step back from the content of this story about my experiences during and after jury selection. What was I doing? During jury selection, I kept track of my probability of being selected as a juror using a probability model. My initial motivation for doing this was to relieve boredom by keeping a running tally about my chances of being selected. I hate being bored (probably due to my mother bringing me on endless shopping trips when I was a little kid). Later, I was curious about the process of jury selection, and wondered what each attorney would do to foster his objectives. I wondered about the mental models of the judge and the attorneys: “What were they thinking? What strategy were they each deploying during jury selection? What model of an ideal juror did the defense attorney and state’s attorney have in mind? I thought like a modeler: trying to create models of what was in my environment and looking for the hidden structure behind people’s actions. I was surprised when the judge asked the attorneys to reconsider their choices. That made the judge’s mental model more interesting to me. It hinted at an unexpected and interesting approach. After I left the courtroom, I started seeking explanations about what happened. In short, I was thinking and behaving like a modeler. It may never get me a seat on a jury, but it does make life a hell of a lot more interesting. This was a day in my life as a modeler.

My passion is to explore the unknown through modeling, and explore the modeler’s inner world and external behavior as he or she models. This blog will share what it is to be a modeler, and do so with stories. Modeling is a key activity in many disciplines from physics to psychology. Modelers create models of how stars evolve and models of how lives evolve. Modelers use models of how to invest and models of how to innovate. Most of my models cross disciplines, applying techniques from one to another, often (and hopefully) adding emerging perspectives and new insights.