Where Magic Can Happen. Part 1: Opportunities 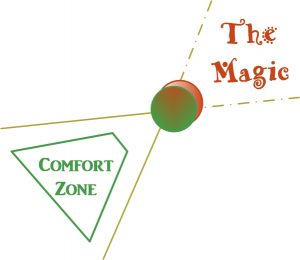 My son Daniel and his girlfriend went to a hip hop dance class. Daniel went with some trepidation since he felt a bit shy and did not know what to expect. The instructor started the class by pointing to something he had written on a blackboard. It was a box with the words “comfort zone” in the center. Then, he pointed to a blackboard on the other side of the room. It had the words “THE MAGIC.” He then announced, “this is a room where magic can happen, but in order to get there one must leave their comfort zone.” This essay is about challenges to leave your comfort zone. and how we can accept some of those challenges as opportunities. And, when doing so, move toward experiencing the magic. How do we recognize a challenge as an opportunity?

Six months before I entered Brooklyn Technical High School, my home town of Staten Island opened Edwin Markham, its first junior high school. I had to attend. Many different grade schools fed into this school so I mingled with kids I did not know. I was a shy kid, and, believe it or not, was much shorter than my current height of 64 inches (163 cm). One day I was in a music class sitting near the back of the room. The room was like a miniature auditorium with each subsequent row higher than the previous row. Sitting next to me, on my left, was a large, and much taller kid whom I did not know. He started taunting me. I don’t recall his exact words, but after a while I started shaking, which got worse when I noticed that kids near me had heard him. After about ten minutes of taunts, still shaking and without conscious thought, I turned to my left and hit him in the head with my right fist. It was a loud noise and the teacher ignored it even though he could see us. A few seconds later he hit me back, and that was the end of it. He never bothered me again, and kids I did not know were congratulating me as I walked out of the classroom. Evidently, this kid was a known bully.

What happened? I left my comfort zone and reacted without thinking of the consequences. This incident happened in 1959 and I still remember it. Was there an opportunity here? It was at least an opportunity to assert myself, but I was not conscious of it. There was a better opportunity that I did not see as a kid. It was the opportunity to do nothing, ignore him, and to choose to not feel insulted!

Eleven years later, some Korean soldiers in Vietnam introduced me to the martial arts, and ten years beyond that, in 1980, I joined my current martial arts studio. Now, I tell my martial arts students (adults and kids): “I am teaching you karate so you will never have to fight.” It is a powerful and confident feeling to know that you can fight if there is no other way, but on the other hand, it also helps to be able to access a state of “un-insult-ability” (more about this later). So, maybe that incident in junior high school was an opportunity to learn how to do something different. It took me decades to realize this. This essay is about being more flexible in evaluating opportunities. What if we can respond consciously to known opportunities that may feel uncomfortable in the moment (and not wait decades)?

When my son Daniel was twelve years old, he was waiting on a long line to jump off a high diving board for the first time in his life. He wore a pair of goggles since he did not like water getting into his eyes. Kids in line behind him were yelling for those in front to hurry up and jump. A kid ahead of Daniel jumped, and a life guard had to rescue him. As Daniel’s position in line brought him closer and closer to the diving board, he felt his anxiety rising, changing into fear. At one point he felt terrified. To him, the danger was clear. The board was high up and was slippery. He could smack his head on it. Who knows what could happen. How will it be to dive with goggles? He liked swimming and wanted to get better at it, and he wanted his friends to accept him. He thought jumping would help with both. So, as he neared the “plank” he acknowledged his fear before it paralyzed him, and gave himself permission to dive. He thought “Get up there, get up there. What the hell is wrong with you? Jumping was no big deal for the other kids. Things will go poorly if you don’t plan ahead. Stop thinking. Focus. It’s NOW or NEVER!” Then, he jumped, and although his goggles flew off, the dive went well. He said it was much easier the next time he dived.

Like the hip hop class room, the diving board was the place “where magic happened.” What did Daniel do when he reached that board? He set the frames: “Plan ahead first, then execute without any more thinking.” And, “I am jumping, not alone, but in a place among my peers where my performance matters.” He experienced some states, for example: acknowledging his fear, permission, and focus. All his frames and states led up to his decision to jump! What frames can you set and what states can you access to leave your comfort zone and accept an opportunity?

I took the Neuro-Semantics Trainers Training (NSTT) many years ago and decided to retake it this year. On June 20, ten days before the start of the training, Michael Hall, co-developer of Neuro-Semantics, asked several USA trainers if two could volunteer to benchmark participant presentations. The benchmarking form has nine presentation skills (e.g., group rapport, inducing states, effective use of voice, and demonstrating). Each skill has a list of specific criteria a benchmarker can use to assess a person during his or her presentation. I had benchmarked some coaching skills at a meta-coaches training four years ago, but was no expert and this form had different skills. Thirteen minutes after Michael sent the message, and about 10 seconds after I read it, I volunteered to be a benchmarker, which was out of my comfort zone. I thought it would be a good way to immerse myself into the training and better connect with the participants. A short time later, Michael sent me the three-page, very-detailed benchmarking form. Some of the terms listed were new to me, but I thought I could manage. The next day to my surprise, Michael sent me the 70-page Assist Team manual, and told me to print it and bring it to Colorado for the training. I had not realized being a “benchmarker” meant being part of the NSTT Assist Team, and included doing much more than benchmarking. Being on the Assist Team offered many more opportunities to leave my comfort zone, including preparing for and giving an evening presentation on the state of “un-insult-ability”, which was a new topic for me.

Suppose something challenged you to leave your comfort zone and leap into the unknown. How would you recognize an opportunity behind that challenge? And, if you did, would you leap? What frames and their associated mind-body states would you need to have?

This Series and the Magic

This is Part 1 of my series on “Where Magic Can Happen.” In this essay, I used the term “the magic” to mean when we are engaged in an activity that is aligned with our highest intentions. The period of time where “magic can happen” is when we are deciding to accept a challenge as an opportunity. If we accept the opportunity, it is like accepting the “call to adventure” in a hero’s journey. It is about setting the frames and appropriate states to be able to move from your comfort zone and take appropriate opportunities. As we progress in this series, we will end up with a new Neuro-Semantic pattern and revisit some old ones.

Please write to me (info@pascalgambardella.com) with stories of how you went from your comfort zone to accepting opportunities (or not). Questions or comments below are encouraged as well.

Continue to Part 2:”Embracing Opportunities.” In it, I design a new technique to help you leave your comfort zone to embrace opportunities.

Near the end the NSTT, each member of my group was given the opportunity to “speak from the heart” for five minutes. This essay represents “take two” of my speech. I want to thank Michael Hall, Jason Schneider, Salvador Mora, Francisco Dallmeier, Ines Yoneyama, Nadia Dichi Castillo, and Duran Valle for listening to my slightly incoherent, first take.
.